A loop is used for executing a block of statements repeatedly until a particular condition is satisfied. For example, when you are displaying number from 1 to 100 you may want set the value of a variable to 1 and display it 100 times, increasing its value by 1 on each loop iteration.

In C++ we have three types of basic loops: for, while and do-while. In this tutorial we will learn how to use “for loop” in C++.

Syntax of for loop

Flow of Execution of the for Loop

As a program executes, the interpreter always keeps track of which statement is about to be executed. We call this the control flow, or the flow of execution of the program. 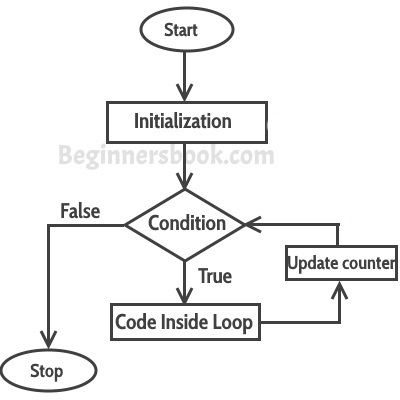 Third step: After every execution of for loop’s body, the increment/decrement part of for loop executes that updates the loop counter.

Fourth step: After third step, the control jumps to second step and condition is re-evaluated.

The steps from second to fourth repeats until the loop condition returns false.

Example of a Simple For loop in C++

Here in the loop initialization part I have set the value of variable i to 1, condition is i<=6 and on each loop iteration the value of i increments by 1.

Infinite for loop in C++

A loop is said to be infinite when it executes repeatedly and never stops. This usually happens by mistake. When you set the condition in for loop in such a way that it never return false, it becomes infinite loop.

This is an infinite loop as we are incrementing the value of i so it would always satisfy the condition i>=1, the condition would never return false.

Here is another example of infinite for loop: