In this guide, you will learn about primary key in DBMS with the help of examples. We will discuss, what is a primary key, how it is different from other keys in DBMS such as foreign key and unique key.

What is a Primary Key

A primary key is a minimal set of attributes (columns) in a table that uniquely identifies tuples (rows) of that table.

For example, you want to store student data in a table “student”. The attributes of this table are: student_id, student_name, student_age, student_address. The primary key is a set of one or more of these attributes to uniquely identify a record in the table. In the case, since student_id is different for each student, this can be considered a primary key.

Characteristics of a primary key

Primary key has the following characteristics:

The value of primary key should be unique for each row of the table. The column(s) that makes the key cannot contain duplicate values. This is because non-unique value would not help us uniquely identify record. If two students have same student_id then updating a record of one student based on primary key can mistakenly update record of other student.

The attribute(s) that is marked as primary key is not allowed to have null values.

4. Not dependent on Time

The primary key value should not change over time. It should remain as it is until explicitly updated by the user.

The primary key of the record should be accessible to all the users who are performing any operations on the database.

6. Can have more than one attributes

It can be a set of more than one attributes (columns). For example {Stu_Id, Stu_Name} collectively can identify the tuple in the above table, but we do not choose it as primary key because Stu_Id alone is enough to uniquely identifies rows in a table and we always go for minimal set. Having that said, we should choose more than one columns as primary key only when there is no single column that can uniquely identify the tuple in table.

While creating table you can define primary key like this:

For example: Here we are making stu_id primary key while creating the table STUDENTS.

Properties of a Primary Key

What Are the Benefits of a Primary Key?

The following are the advantages of a primary key: 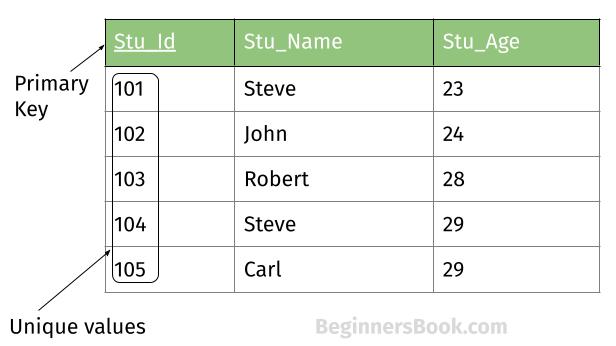 Another example: composite key with more than one attributes

Consider this table ORDER, this table keeps the daily record of the purchases made by the customer. This table has three attributes: Customer_ID, Product_ID & Order_Quantity. 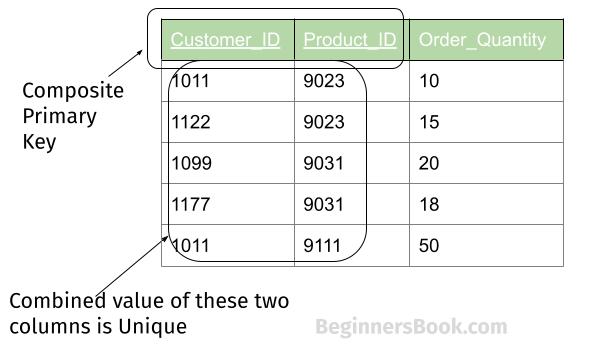 How to define primary key in DBMS?

Let’s say we want to create the table that we have discussed above with the customer id and product id set working as primary key. We can do that in SQL like this:

Suppose we didn’t define the primary key while creating table then we can define it later like this:

Another way:
When we have only one attribute as primary key, like we see in the first example of STUDENT table. we can define the key like this as well: