A computer network is build up from several components. These components together makes it possible to transfer data from one device to another and makes smooth communication between two different devices. In this guide, we will discuss the main components of a computer network.

Basic components of a computer network 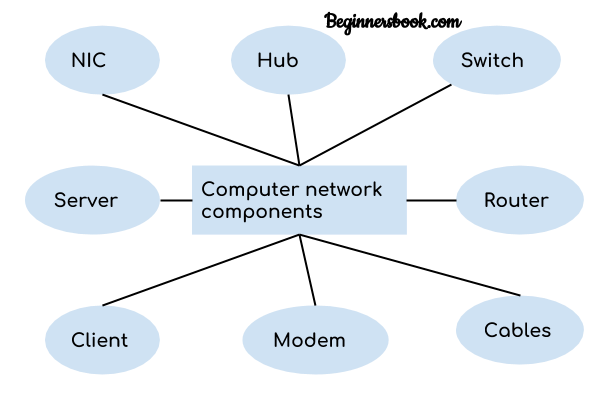 Server: Servers are computers that runs operating system and hold data that can be shared over a computer network.

Transmission Media: All computers in a computer network are connected with each other through a transmission media such as wires, optical fibre cables, coaxial cables etc.

Network Interface card: Each system or computer in a computer network must have a card called network interface card (NIC). The main purpose of NIC is to format the data, send the data and receive the data at the receiving node.

Hub: Hub acts as a device that connects all the computer in a network to each other. Any request that comes from a client computer first received by Hub and then hub transmit this request over a network so that the correct server receives and respond to it.

Switch: Switch is similar to hub however instead of broadcasting a incoming data request it uses the physical device address in the incoming request to transfer the request to correct server computer.

Router: Router joins multiple computer networks to each other. For example lets say a company runs 100 computers over a local area network(LAN) and another company runs another LAN of 150 computers. These both LANs can be connected with each other through a internet connection which is provided by the router.

LAN cable: A wire that is used to connect more than one computers or other devices such as printers and scanner to each other.