Both the data and the signal can be represented in form of analog and digital.

Analog and Digital Data:
Analog data is continuous data that keeps changing over time, for example in an analog watch, the hour, minute and second hands keep moving so you infer the time by looking at it, it keeps changing. On the other hand digital watch shows you discrete data such as 12:20 AM, 5:30 PM etc. at a particular moment of time. 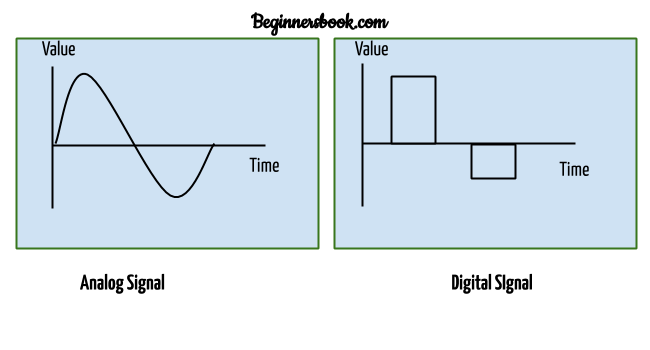 An analog signal can be be categorized as simple or composite.

A simple analog signal can be represented in form of sine wave. A sine wave is shown in the above diagram.

A simple analog signal is smooth, consistent and continuous. As you can see in the diagram above that a arc above the time axis is followed by the similar arc below the time axis and so on.

There are three parameters that defines a sine wave – peak amplitude, frequency and phase.

Frequency and Period: Period is the amount of time a signal takes to complete one cycle, it is denoted by T. Frequency refers to the number of cycles in 1 second, it is denoted by f. They are inversely proportional to each other which means f = 1/T.

Phase: Phase refers to the position of sine wave relative to the time 0. For example if the sine wave is at its highest intensity at the time zero then the phase value for this sine wave is 90 degrees. Phase is measured in degrees or radians.

Bit Rate: A bit rate is measured as bits per second, it represents the number of 1s send in 1 second.

Bit Length: A bit length is the distance a bit occupies on the transmission medium.

Now that you are familiar with analog and digital signals, it’s time time to cover digital transmission which we will discuss in the next chapter.