An array of arrays is known as 2D array. The two dimensional (2D) array in C programming is also known as matrix. A matrix can be represented as a table of rows and columns.

Let’s take a look at the following C program, before we discuss more about two Dimensional array.

There are two ways to initialize a two Dimensional arrays during declaration.

Although both the above declarations are valid, I recommend you to use the first method as it is more readable, because you can visualize the rows and columns of 2d array in this method.

Things that you must consider while initializing a 2D array

We already know, when we initialize a normal array (or you can say one dimensional array) during declaration, we need not to specify the size of it. However that’s not the case with 2D array, you must always specify the second dimension even if you are specifying elements during the declaration. Let’s understand this with the help of few examples –

How to store user input data into 2D array

In above example, I have a 2D array abc of integer type. Conceptually you can visualize the above array like this: 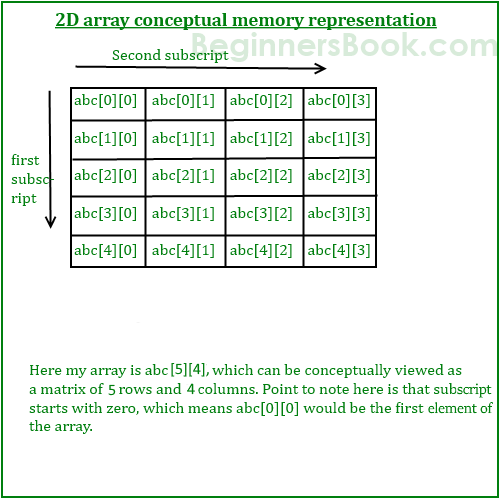 However the actual representation of this array in memory would be something like this: 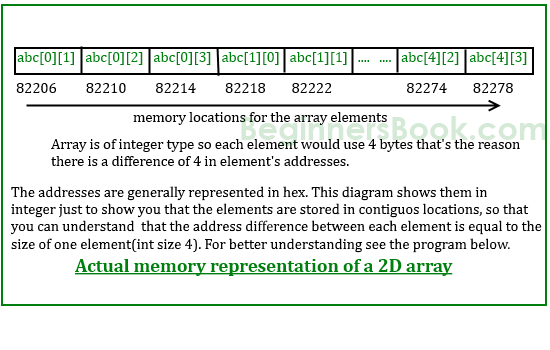 The actual address representation should be in hex for which we use %p instead of %d, as mentioned in the comments. This is just to show that the elements are stored in contiguous memory locations. You can relate the output with the diagram above to see that the difference between these addresses is actually number of bytes consumed by the elements of that row.

How to calculate the address of an element in 2D array?

There are two techniques to find the address of an element in 2D array:
1. Row Major Order
2. Column Major Order

If am array is represented by arr[x][y] where x represents the rows and y represents the columns then the address of a random element arr[i][j] can be calculated as follows:

Here Base Address represents the address of element arr[0][0] (the first element of the array).

If an array is represented by arr[x][y] where x represents the rows and y represents the columns then the address of a random element arr[i][j] using column major method, can be calculated as follows: