Structure is a group of variables of different data types represented by a single name. Let’s take an example to understand the need of a structure in C programming.

Why we need structure in C ?

We can solve this problem easily by using structure. We can create a structure that has members for name, id, address and age and then we can create the variables of this structure for each student. This may sound confusing, do not worry we will understand this with the help of example.

How to create a structure in C Programming

Here struct_name is the name of the structure, this is chosen by the programmer and can be anything. However, always choose meaningful, short and easy to read names and avoid using keywords and reserved words as structure names as those are not allowed. Members data type can be same or different. Once we have declared the structure we can use the struct name as a data type like int, float etc.

How to declare variable of a structure?

How to access data members of a structure using a struct variable?

How to assign values to structure members?

There are three ways to do this.
1) Using Dot(.) operator

2) All members assigned in one statement

3) Designated initializers – We will discuss this later at the end of this post.

Example of Structure in C

In this example, we have created a structure StudentData with three data members stu_name, stu_id and stu_age. In this program, we are storing the student name, id and age into the structure and accessing structure data members to display these values as an output.

Nested Structure in C: Struct inside another struct

You can use a structure inside another structure, this is called nesting of structures. As I explained above, once a structure is declared, the struct struct_name acts as a new data type so you can include it in another struct just like the data type of other data members. Sounds confusing? Don’t worry. The following example will clear your doubt.

As you can see here that I have nested a structure inside another structure.

Let’s take the example of the two structure that we seen above to understand the logic. We are using the . (dot) operator twice to access the data member of inner structure.

Similarly other data members of inner structure can be accessed like this:

Using chain of “.” operator. Let’s say you want to display the city alone from nested struct:

Use of typedef in Structure

typedef makes the code short and improves readability. In the above discussion we have seen that while using structs every time we have to use the lengthy syntax, which makes the code confusing, lengthy, complex and less readable. The simple solution to this issue is use of typedef. It is like an alias of struct.

Instead of using the struct home_address every time you need to declare struct variable, you can simply use addr, the typedef that we have defined.
You can read the typedef in detail here.

Array of Structures in C

An array of structures is an array with structure as elements.

For example:
Here, stu[5] is an array of structures. This array has 5 elements and these elements are structures of the same type “student”. The element s[0] will store the values such as name, rollNum, address & marks of a student, similarly element s[1] will store these details for another student and so on. 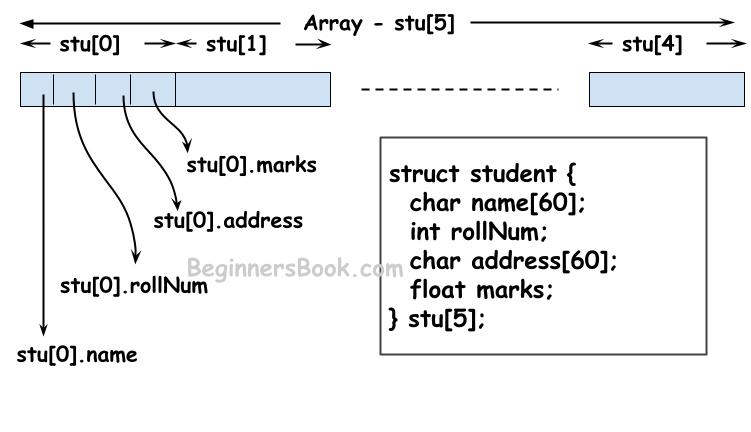 To learn more about structures in C with complete example: Refer this guide.

We have already learned two ways to set the values of a struct member, there is another way to do the same using designated initializers. This is useful when we are doing assignment of only few members of the structure. In the following example the structure variable s2 has only one member assignment.