Step 1: Locate the TC.exe file and open it. You will find it at location C:\TC\BIN\.

Step 2: File > New (as shown in above picture) and then write your C program

Step 3: Save the program using F2 (OR file > Save), remember the extension should be “.c”. In the below screenshot I have given the name as helloworld.c. 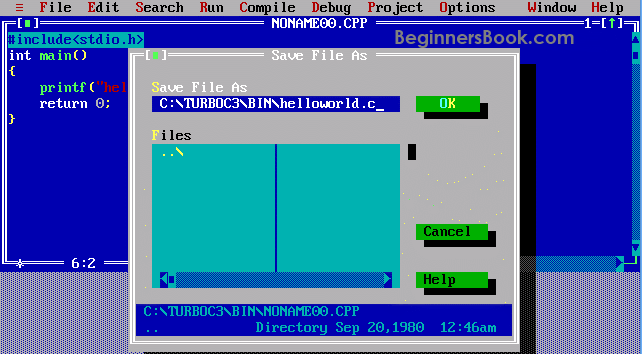 Step 4: Compile the program using Alt + F9 OR Compile > Compile (as shown in the below screenshot).

Step 6: Alt+F5 to view the output of the program at the output screen.

We have seen the steps to compile and execute a C program using Turbo C++. We can also do the same using gcc compiler. The steps are as follows:

The generated file would be helloworld.exe if you are compiling on windows.

Run the compiled program
Once you give the above command, a .exe file would have been created if you are on windows then type the following command to run the source code.

For Mac and Linux OS