Exception handling is one of the most important feature of java programming that allows us to handle the runtime errors caused by exceptions. In this guide, we will learn what is an exception, types of it, exception classes and how to handle exceptions in java with examples.

What is an exception?

An Exception is an unwanted event that interrupts the normal flow of the program. When an exception occurs program execution gets terminated. In such cases we get a system generated error message. The good thing about exceptions is that they can be handled in Java. By handling the exceptions we can provide a meaningful message to the user about the issue rather than a system generated message, which may not be understandable to a user.

Why an exception occurs?

There can be several reasons that can cause a program to throw exception. For example: Opening a non-existing file in your program, Network connection problem, bad input data provided by user etc.

This message is not user friendly so a user will not be able to understand what went wrong. In order to let them know the reason in simple language, we handle exceptions. We handle such conditions and then prints a user friendly warning message to user, which lets them correct the error as most of the time exception occurs due to bad data provided by user.

Difference between error and exception

Errors indicate that something severe enough has gone wrong, the application should crash rather than try to handle the error. 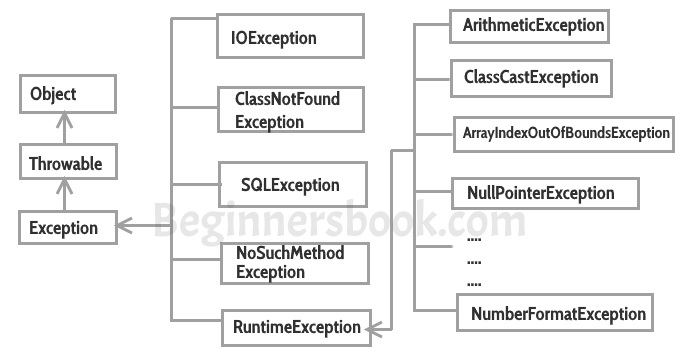 I have covered this in detail in a separate tutorial: Checked and Unchecked exceptions in Java.

What topics are covered in the next tutorials