Home / java / Java static constructor – Is it really Possible to have them in Java?

Have you heard of static constructor in Java? I guess yes but the fact is that they are not allowed in Java. A constructor can not be marked as static in Java.  Before I explain the reason let’s have a look at the following piece of code:

Output: You would get the following error message when you try to run the above java code.
“modifier static not allowed here”

It’s actually pretty simple to understand – Everything that is marked static belongs to the class only, for example static method cannot be inherited in the sub class because they belong to the class in which they have been declared. Refer static keyword.
Lets back to the point, since each constructor is being called by its subclass during creation of the object of its subclass, so if you mark constructor as static the subclass will not be able to access the constructor of its parent class because it is marked static and thus belong to the class only. This will violate the whole purpose of inheritance concept and that is reason why a constructor cannot be static.

Let’s understand this with the help of an example – 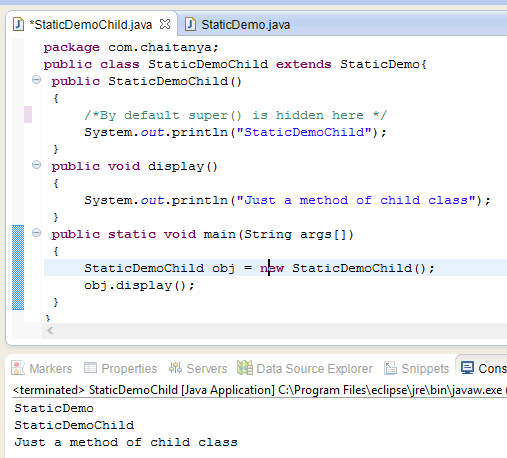 This is the reason why constructor cannot be static – Because if we make them static they cannot be called from child class thus object of child class cannot be created.

Java has static blocks which can be treated as static constructor. Let’s consider the below program – 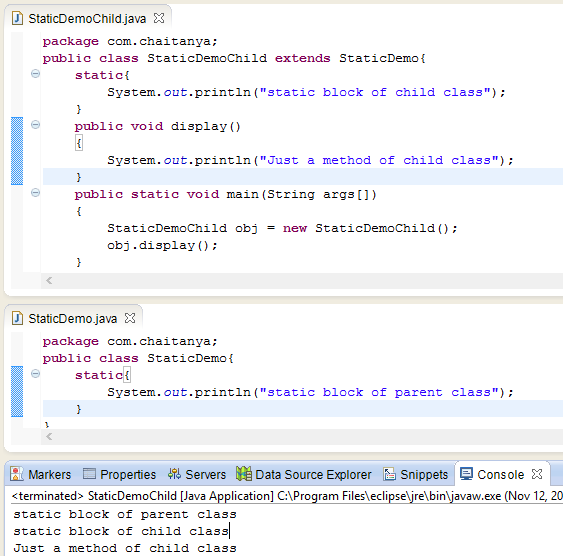 In the above example we have used static blocks in both the classes which worked perfectly. We cannot use static constructor so it’s a good alternative if we want to perform a static task during object creation.